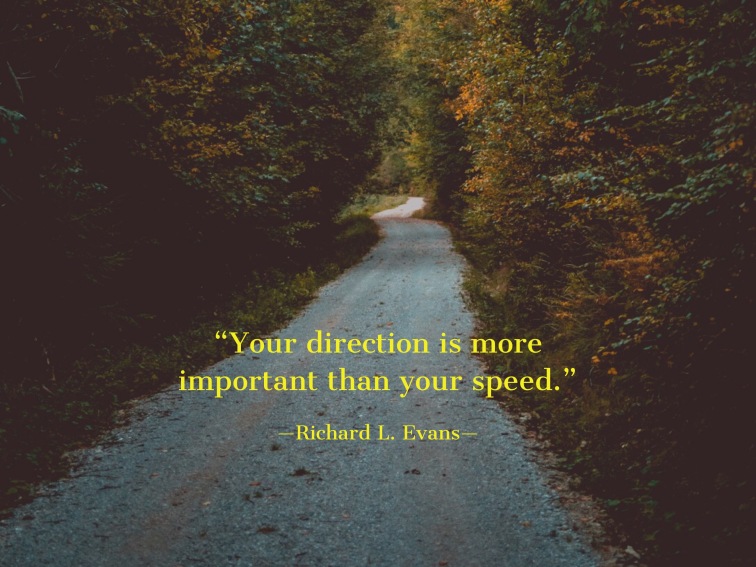 Remember that time you got lost? And you took what you thought was the right road? And you drove a bit faster so could recover the lost time? Only to later discover you had taken the wrong road AGAIN? And you realized that the added speed had merely taken you farther out of your way?

So is the point to travel slower, just in case you’re on the wrong road?

No, that’s not the point. Because if you’re on the right road, traveling slower is not helpful.

So is the point to travel faster, just in case you’re on the right road?

No, that’s not the point either. We’ve already seen that should you be on the wrong road, traveling faster is counterproductive. So what IS the point?

The point is expressed in the quotation itself:

“Your direction is more important than your speed.”

Some people think that speed is the all-important factor. It’s really not. The more important factor is DIRECTION. Because if you’re traveling in the right direction, sooner or later your destination will be reached. Which IS the point.

I was personally reminded of this principle recently.

I’ve lived in my new city for about a year. I’ve gotten to know my way around pretty well, so I’m confident when I need to travel to some place in the city. I don’t use GPS, for reasons I won’t go into. So if I’m going to go somewhere, I not only need to know where it is, I must know the route to get there.

A few weeks ago I needed to get to a dental appointment. But I had recently moved. So even though I had been to this dentist in the past year, I’d now be traveling from a different place, so the route was different.

I thought it would be simple getting to the dentist. It was not. I thought I would arrive a bit early. I did not. So what happened?

I missed one key turn on the journey. Which then had me traveling in the wrong direction—unbeknownst to me. Well, after a period of time, I felt I should have arrived at my destination. But I had not. So what did I do? Yep, you guessed it. I began to drive faster. Which took me ever further off course.

In desperation, I phoned the dental office and explained that I was lost and could they help me? They gave me a simple course correction, and I was on my way with renewed confidence. But after driving for another fifteen minutes, it was painfully clear they had given me wrong directions. It turns out the road they told me to turn on DID NOT CROSS the road I was traveling on.

I was desperate again. I did not want to lose my appointment. So I started driving faster. Yeah, I know. Only to take myself even FARTHER away from my destination.

I called a second time. This time the directions were correct. But I was nearly 45 minutes late when I arrived. Fortunately another patient had come in early, so my appointment was salvaged.

It’s better to take your time and be certain of where to cut the board. Because no matter how quickly you cut the board, cutting it in the wrong place will not work well.

Of course, this lesson doesn’t just apply to literal travel on actual roads. It applies to life itself. As you’re traveling through life, it’s a good idea every now and then to check on your direction. Confirm you’re going the right way. Make sure you’re headed the right direction for the destination you seek. If not, don’t make the mistake of increasing your speed. Change your direction.

Remember that it’s less important how fast you’re traveling, and more important to be headed the right way. The surest way to get where you want to go is to travel in the right direction.

You can receive Quotation Celebration automatically in your email inbox by clicking the FOLLOW button at the bottom of this screen and leaving your email address.

Your comments are most welcome.

Thank you for reading Quotation Celebration.

4 thoughts on ““Your direction is more important than your speed.” (Richard L. Evans)”